Number of people contesting Wills is increasing – How to reduce the risk of this happening to your Will?

30 Jul Number of people contesting Wills is increasing – How to reduce the risk of this happening to your Will?

Posted at 08:48h in LatestNews by rutters 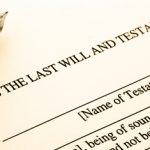 A person making a will has a choice about who benefits from their estate in the event of their death. However, it should not be forgotten when making a will that there is always the risk that a person could try to contest a will by trying to claim they should receive a greater share or if they have not been left anything trying to claim they should receive a share of the estate. This is why it is important to instruct a qualified legal professional to prepare your will.

Within 2019, the number of contested will cases being heard at the High Court reached a record high of 188, which is an increase of 47% from 2018 (according to figures released by the Ministry of Justice). However, the number does not include people who contest a will but do not end up applying to the High Court because a settlement is reached or they decide not to continue with contesting the will. This means the number of people contesting wills is significantly higher than the numbers recorded by the High Court.

Challenges to wills are of course nothing new, but the increase in financial pressure on disappointed beneficiaries (most recently of course involving the ramifications of Covid-19) plus the exponential rise of house prices across a wide swathe of the UK may encourage claims where previously they may not have been made. Combined with the nature of many modern relationships (e.g. more couples choosing to cohabit rather than marry and also people who are on their second or even third marriages) mean more significant disputes may often come to fruition whereas previously they may not have had the same impact.

Legal challenges against wills can take many forms, not just from disgruntled individuals who are unhappy with their level of inheritance, such as undue influence, errors in will preparation or execution and lack of mental capacity when it was made. The costs of making such a claim (contesting a will) can be very expensive, however if the estate is valuable and there is a possibility of getting a greater share, people may be willing to incur the expensive costs.

To minimise the risk of a claim, we would recommend that professional legal advice is sought in the preparation of a will. Homemade wills are often a source of a claim, as they may not have been prepared correctly meaning that they are in fact partially or completely invalid. An invalid will leads to a full or partial intestacy, meaning that family members may benefit unintentionally. If a will is going to be controversial between family members, it is sensible to manage the expectations of family members ahead of time. These conversations may of course be extremely difficult, but could be worth the heartache if it saves significant time, money and emotional stress after someone has died.

If you wish to make a will or update your will please contact Matthew Billingsley on 01258 444481 or m.billingsley@rutterslaw.co.uk